So, let us move on into the programming stage of the SSTuino Innovator’s Kit!

Before we go into programming with the Arduino app, let us take things slow with the coding functionality on TinkerCAD!

The Arduino programming language is very simillar to the C/C++ Language and are actually C/C++ functions that can be called into your code. When the code is uploaded onto the SSTuino, the compiler inside the Arduino IDE will convert it to something that the microcontroller can read.

Create a new circuit on TinkerCAD, and set it up like this:

Once you set it up and press start simulation, notice the LED on the Arduino blinking? Why does this happen?

The reason this happens is that TinkerCAD places in a sample code when you insert the Arduino into the circuit.

Stop the simulation and press the CODE button. You should see something like this:

TinkerCAD is very simple to use as you can use block coding to program the Arduino. You would have had experience in block coding with Scratch, Thunkable and Blockly Games. The programming environment would be very simillar to those you had used before.

If you would like to program with text in TinkerCAD, you can also do so like this:

They also have another format called Blocks + Code. The text code changes according to the blocks that you place.

So what does this block of code do? It tells the Arduino to:

and it repeats all over until you turn off the circuit by unplugging the Arduino from the power source.

Now change the value of the wait ___ seconds to something that you like. What happens then?

Now, let us connect up the circuit:

After you start simulation, it should look something like this:

Wait a minute… How come the LED attached turns on and off even though I did not program it? Well the reason behind it is that the built-in LED pin is also connected to pin 13. This means in the program, LED_BUILTIN is also pin 13.

In TinkerCAD, another awesome feature is the ability to download the program that you have coded just now! You just have to press the download button as shown here:

A .ino file will be downloaded on your mac and can be used on the Arduino IDE. Open the file and you would see this:

A folder will then be created and you will be able to see this code appear. 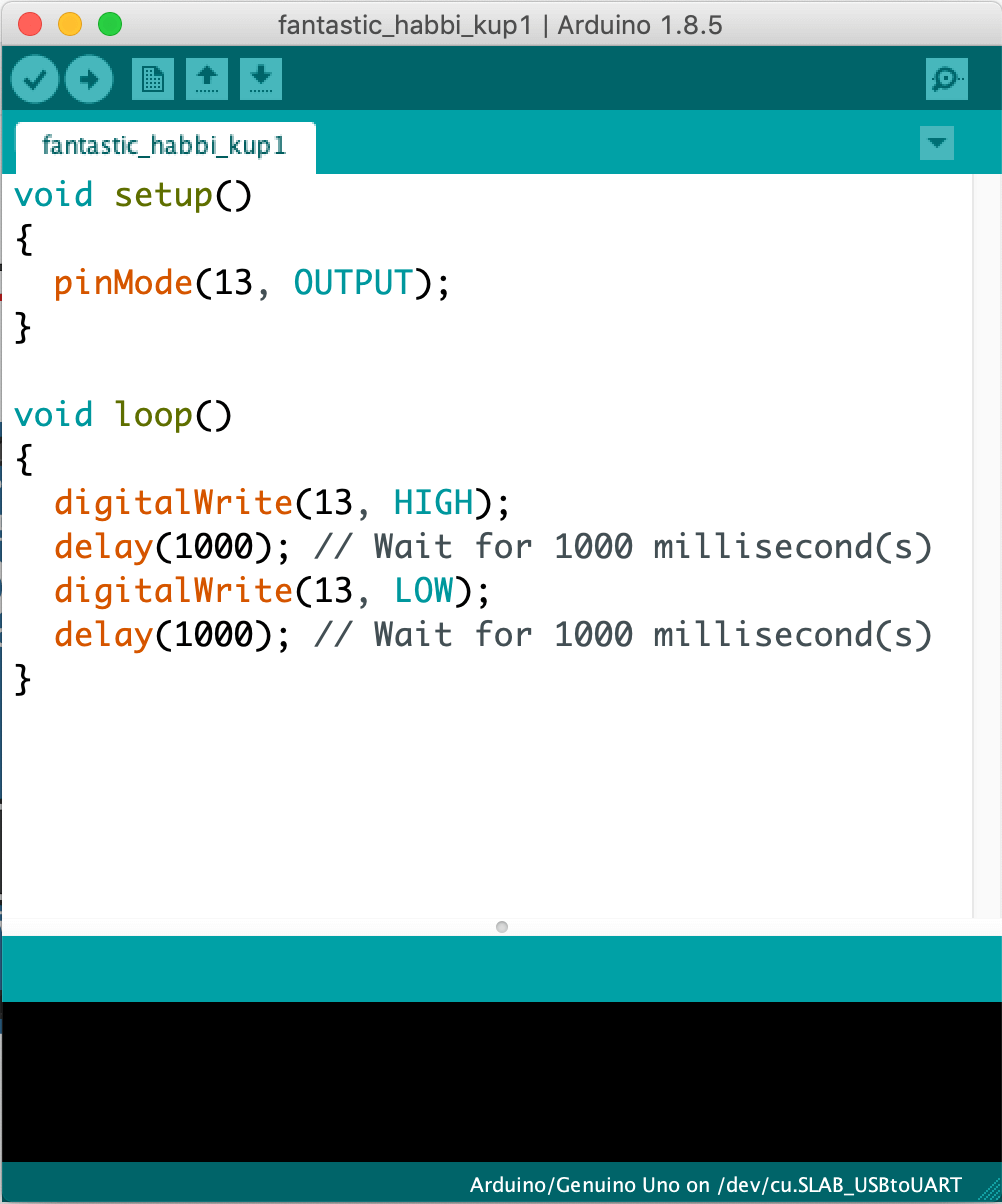 How does the code work?

You would probably have noticed that this code looks rather different than the blocks you see in TinkerCAD. The Arduino app that you are using right now is called an Integrated Development Environment or IDE for short and is one of the places that you can program your SSTuino in.

For example, I use another IDE called Visual Studio Code to modify this website for you! (in Markdown) 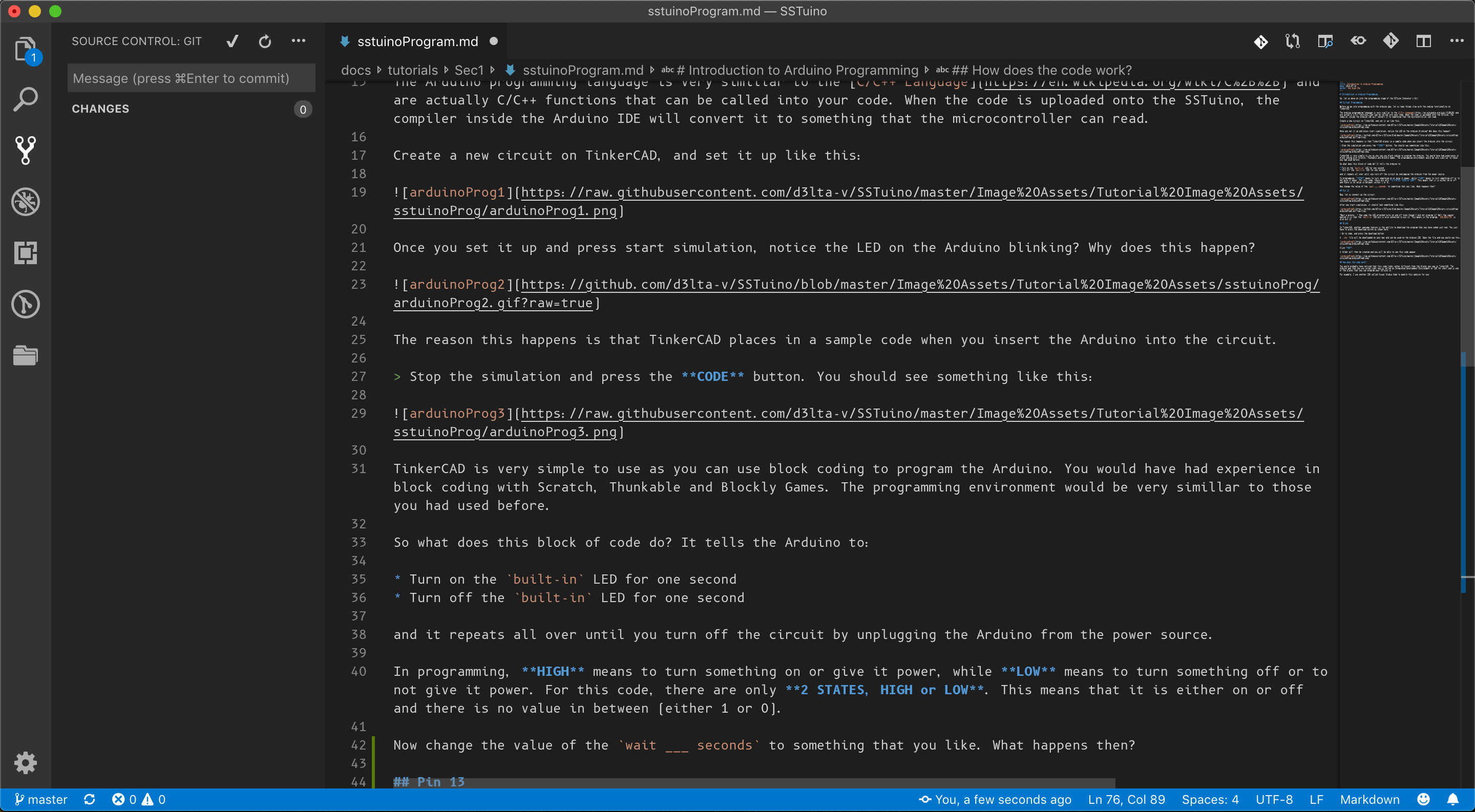 Let us analyse the code we see here

Here is an explanation on how most basic Arduino code works:

Learn more about the “()” :http://www.cplusplus.com/reference/functional/function/operator_func/

If you want to read up about C++: http://www.cplusplus.com/

Connect the SSTuino to your mac after you have finished assembling the circuit.

In your Arduino IDE, go to

Make sure to select the correct board:

And now you can upload with this button: 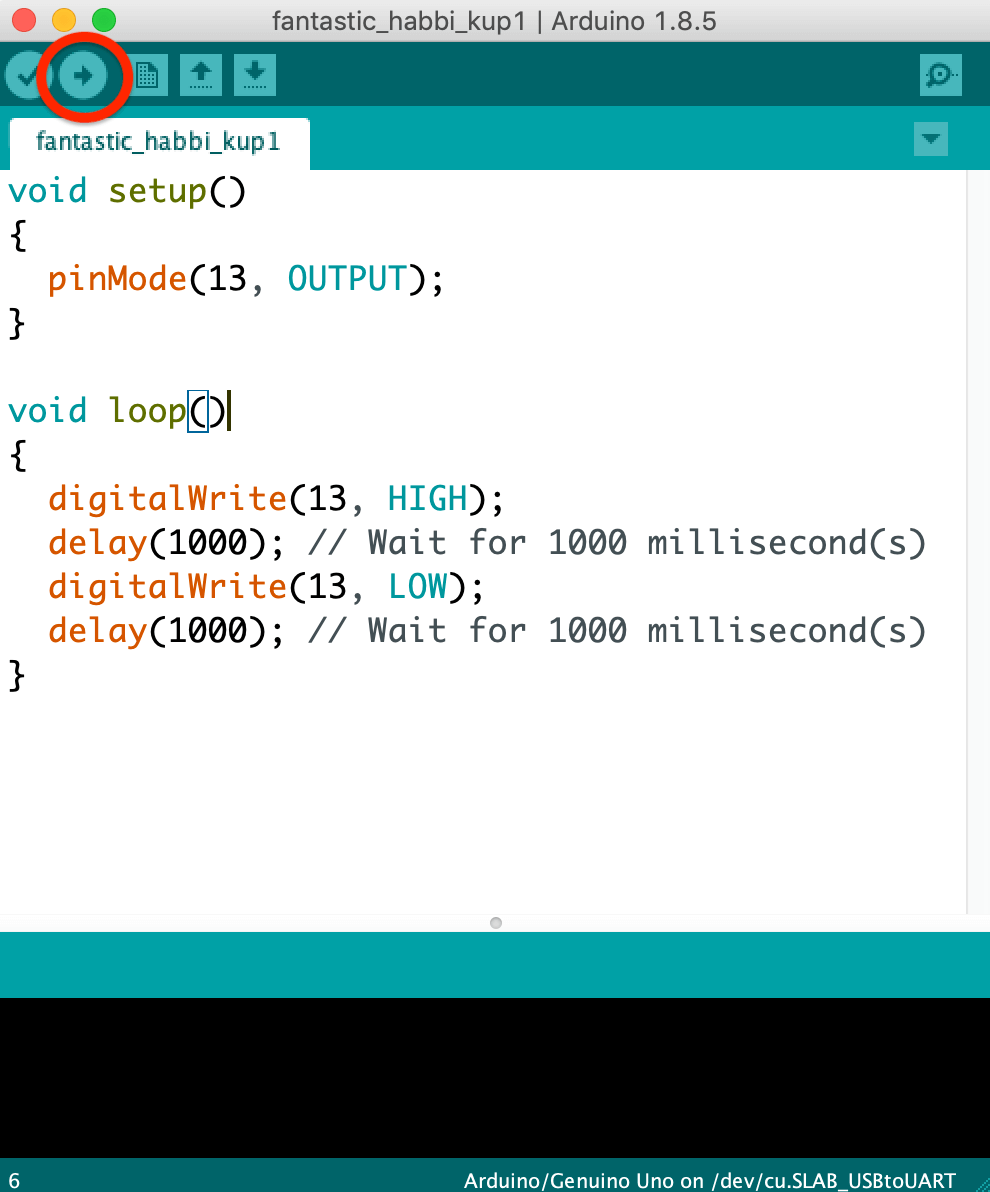 You should see your circuit light up like this:

In the next tutorial series, we will be looking at how to make the SSTuino recieve inputs from your components, and then have a reaction from that.